Over the weekend of 15-17 April, 2016 I teamed up with three other like minded ladies and off we went to Lake Dobson, in Mt Field National Park, southern Tasmania, on a Fagus chase.

Fagus (Nothofagus gunnii) is a small tree, usually growing up to 2 metres. It is Tasmania’s only deciduous tree, and has a superb autumn display.

Best known as fagus, the deciduous beech turns a spectacular range of autumn colours, from rust red through to brilliant gold, during late April and May.

On Friday 15 April two os us set off to spend two nights at the Government Huts on the Lake Dobson Rd (bottom centre on the map) and the other two ladies joined us on Saturday morning.  We travelled via new Norfolk – spying many Targa Tasmania cars along the way – with a spot of hawthorn berry and rosehip foraging at Plenty, arriving at the visitor centre at noon.  After collecting our key, we trekked up the snakey Lake Dobson Rd, in good condition from recent grading, to the Huts.

On arrival Dawn and I decided to check out the Snowgum track which leads up to the top of the range and the Tarn Shelf.  My HEMA map described it in a way that made it sound like an easy stroll.  NOT SO!

I had, fortunately, had the foresight to put out a call to the Southern Tasmania Ski Association to ask if anyone was going up that weekend so I could, hopefully, access the locked gate and drive up to the ski huts – saving us a few kms up and return, as I have walking problems over long distances and rough ground (more on that later).

Bishwa Oakes and Ambrose Canning responded magnificently – thank you people – and I thus had a Jeep Track key.  After dumping our great in the Fagus Hut, we drove up Lake Dobson parking area and on through said gate to the Mt Mawson Ski Hut – the van then decided it didn’t like the gravelly corner and that was as far as it was taking us, thanks very much!  We thought, no drama, there is the Snowgum track almost adjacent, so off we went.

Now please bear in mind, I am 62, reasonably fit but with an arthritic ankle (25+ yr old never diagnosed break) and Dawn is a few years younger but not super fit either.  The things I had read and the people I had asked said we’d be fine if we went slowly.  Well, there wasn’t much choice on that score, as the track turned out to be a boulder scree with barely a patch of flat track or earth until we got to the lookout.  I was really, really glad I had my sturdy hiking staff.

This is the track looking down from the lookout, so do bear in mind what I said earlier about problems on rough ground!, and the view of Lake Seal from up there, plus one across from the lookout (marked on the map) to the area of the Tarn Shelf to the right of the day shelter.  It was magnificent!

However, we were rather knackered and it was starting to come over very windy and sprinting, and we just wanted to get down.  There was supposed to be an easier track, going back to the top of the section of road we had not been able to drive up, going off from the lookout.  We cast around for a while trying to find this track, but no luck,  We found an area of duck boarding but it ended in what, to us, looked like an impassable boulder field.  As it was now after 4pm we just headed back the way we had come, and arrived back at the car sore and tired.  Some of the large rocks I’d scrambled up on the way up had to be negotiated by sitting on the edge and dropping over!

The booklet on the huts and area thankfully informed us the Fagus was usually good around lake fenton, a nice FLAT access just a couple of kms back down the lake Dobson road.  So with en expedition there planned for the morning, it was dinner, a glass of wine and an early night, in a hut that was beautifully warm from the wood fire stove.

A lovely morning, despite light rain, and a small explore round the area of the huts after Gwenda and Sharon arrived.  We saw possum, wombat and wallaby scats – and some from the more invasive and undesirable species of US (shame on you visitors), plus some unmentionable rubbish which I put in out rubbish bag – but apart from those small blast it was lovely.

The only drawback at the Huts is having to walk to the deep drop composting loos, but it’s not far and better than none!

We set off for Lake Fenton round 9.30, in drizzly rain and quite gusty wind.  It’s just a 5 minute drive back eastwards, and we parked near the gate.  The fagus area is right at the gate, very convenient, and suitable to take quite small children to.  But close access does require, again, rock scrambling!

We saw all colours of fagus here, from green to dark red.  The leaves of the tree are very small, I have included one with my fingers in them to give an idea of scale.

After getting out fagus fill, we explored the small area around between the entry to the lake and the road, to the east, which includes the outlet for the water flow and the old lake Fenton Hut (simply marked as ‘hut’ on the map) built in the 1920s by Bill Belcher, appointed the first ranger of Mt Field National Park in 1917.

We saw a lot of different types of vegetation and fungi.  There us a very great diversity up here, and it’s a fabulous area to visit.

From here we walked back to the dam wall area, where I saw a plant I’d never seen before, which I think is Mountain rocket, Bellendena montana, although the sources say it flowers from December to January, so I am still not sure.  It was growing near the lake wall in a disturbed area of ground by a fence. 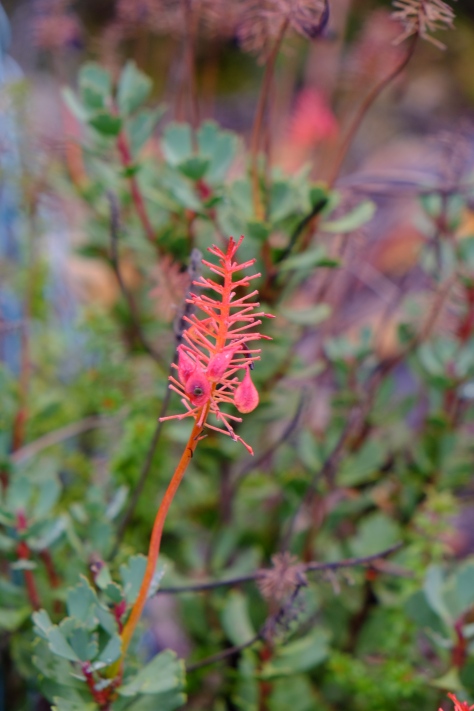 After the explorations dawn and I decided on a rest, and the others went to have an explore over Wombat Moor towards the south along the walking track – a somewhat wet and muddy decision, as it turned out!

After a cup of delicious hot soup and a bit of a rest, we  wandered around for a few shots round the huts, and when the other ladies returned organised dinner and a good chat round the fire.

I was up about 6am, and caught a very brief and pretty sunrise with pink clouds and some mist rising from the higher slopes.

After packing the vehicles, we set off, Gwenda and Sharon for the Tarn Shelf circuit – well done ladies, a truly epic achievement – and dawn and I for a rather more sedate explore round the foot of lake Dobson, close to the car park. The water its amazingly clear and there is a lot of fallen timber beneath the surface.  And wombats really do do square poo! 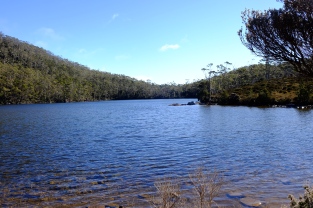 After that, we headed home, with frequent stops for fungi shots at the Woodland walk and by the sides of the road.

Last stop was the Visitor Centre to drop off the key.

And a good time was had by all, despite some of us not actually reaching the Tarn Shelf.

My thoughts on my photography and what I'm doing, photographically.

My Calendars at RedBubble